So Overwhelmed You Can't Choose? - The Best Yes 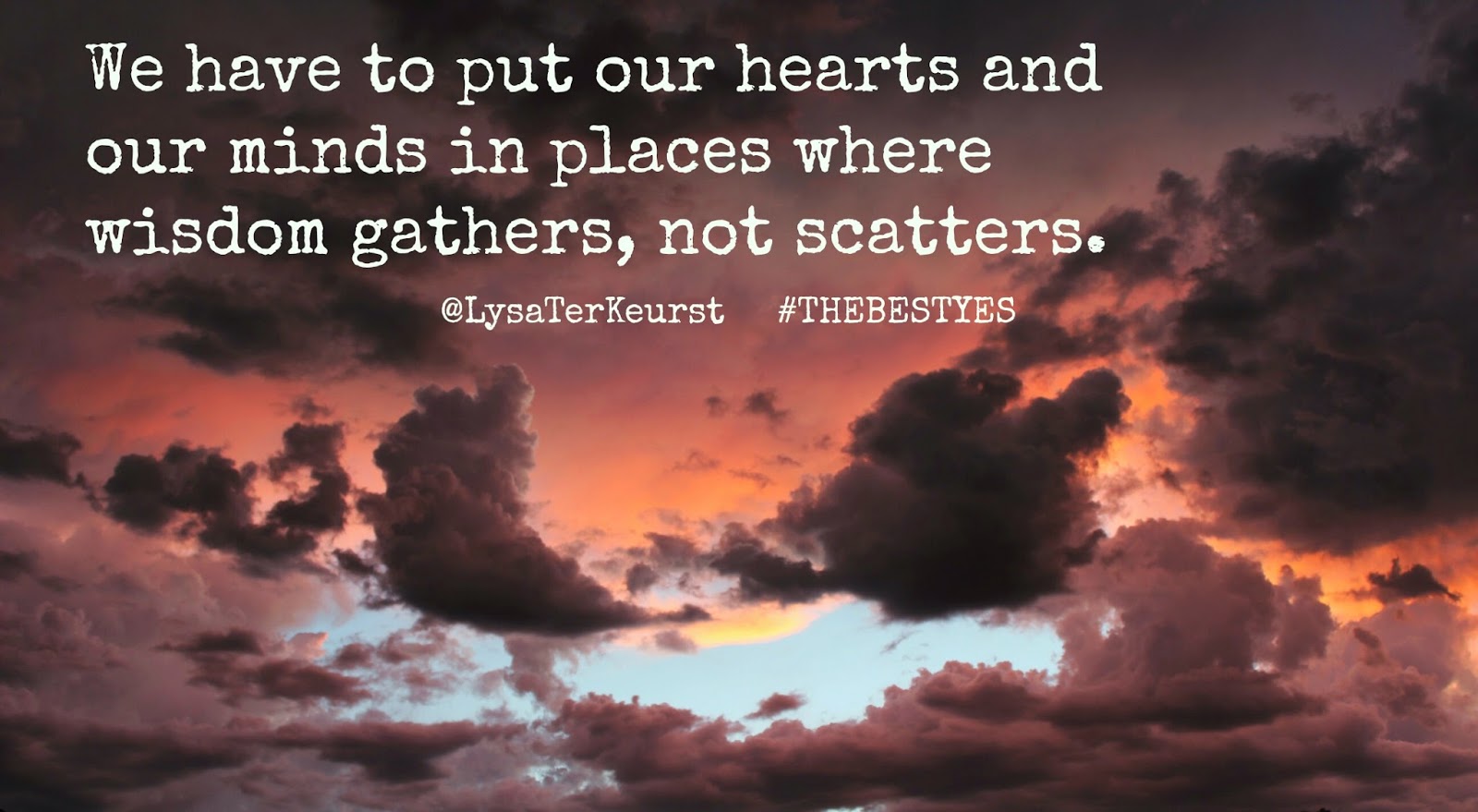 This post is part of Lysa TerKeurst’s “The Best Yes” Blog Tour, and I am out of my mind excited about being a part of it.  I am joining many, many other inspiring bloggers.  Many of which completely fill me with awe.  Let's just say, not only will I be posting, but I will be doing a lot of blog hopping over the next few weeks.  Learn more and come along with us as we explore, enjoy and celebrate "The Best Yes" by a simple CLICK HERE.

I first became aware of Lysa TerKeurst's "The Best Yes" via Proverbs 31 Ministries Online Bible Studies.  I have become a very dependent fan of these studies for a little over a  year.  Each study has had a profound impact on my life.  I didn't know what the book was about, but I knew I would pick it up when the study rolled around in mid September (September 22 in case you are wondering).

But then God...well, he brought me to She Speaks 2014.  A prayerful dream from saying yes to God (inspired by another of Lysa's books, by the way) became a reality, and I joined hundreds of women who wanted to share the love of Jesus through spoken and written word.  Attending She Speaks 2014 was not only a big part of saying yes to God but also a complete faith walk for me, a woman who was deathly afraid of claiming the Lord's vision for fear of mocking and the big NO (PS It was also impossible financially - but for God).

Landing in NC on July 23, my head was spinning with the possibilities of what God would do.  I was excited to be following His will and His call, and nervous about going it alone (well physically alone).  God led me to many wonderful ladies and new friends.  From the pre-conference throughout the weekend conference, I felt many God moments.  One of those moments happened to be purchasing "The Best Yes."  See I still had every intention of waiting to purchase it until the study drew closer, but again, I felt a God tug and bought it after dinner on Friday evening (leaving it in the hotel Saturday morning by the way and missing an autograph opportunity by Lysa - but I digress).

By the time I hit the airport on July 27th, I was spiritually full but also a bit undone.  I was completely overwhelmed by all God had done during the conference.  I was motivated by the lovely women I met.  I was also intimidated by the next step and how could I possibly make it.  With the question "What's next?" rolling through my mind, and a few hours to spare before my flight, I grabbed coffee (okay...and a very carby everything bagel with cream cheese) and began to read "The Best Yes." 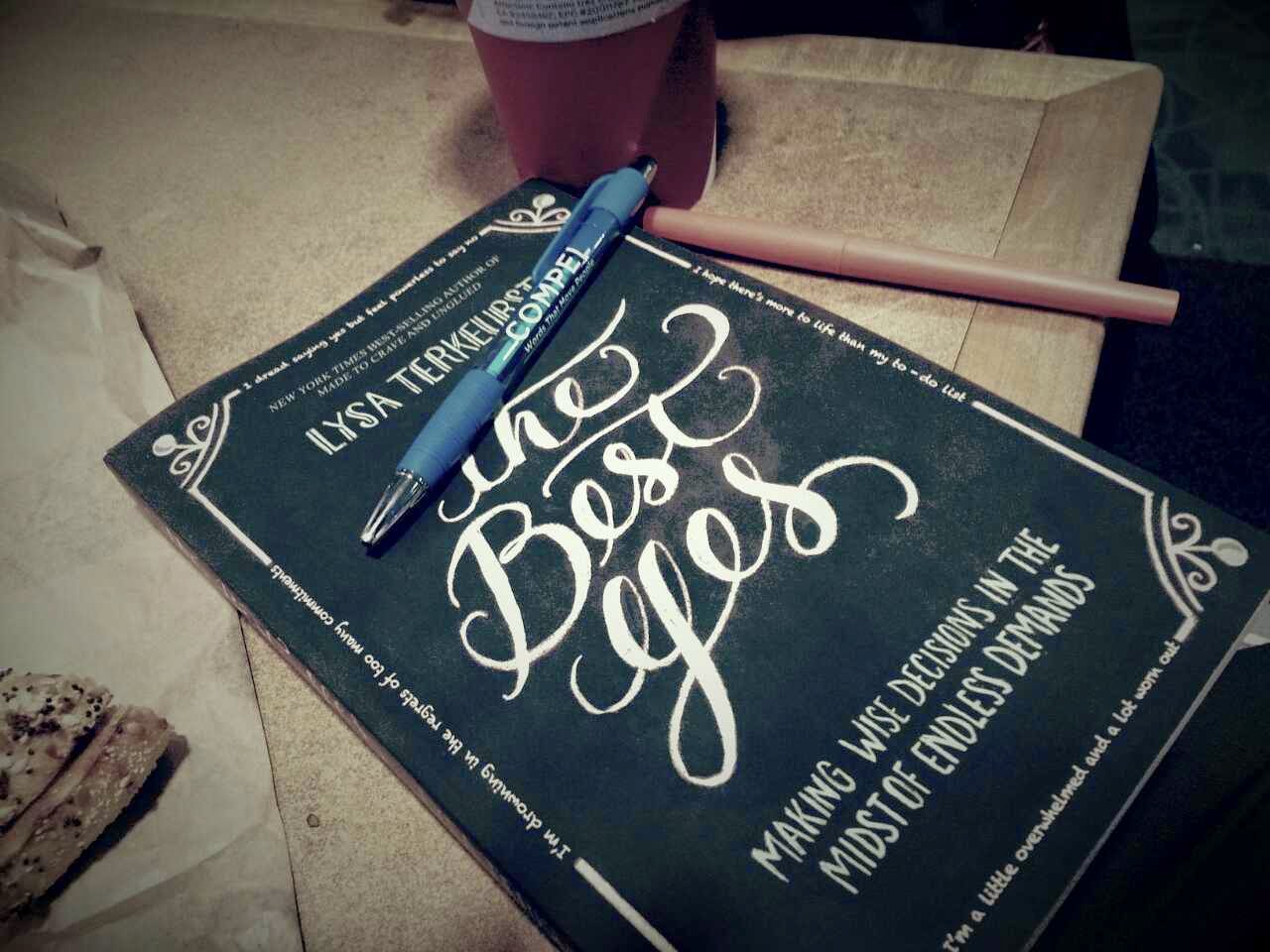 Have you ever read a book that has you nodding your head in agreement or even causes you to talk back to it? That was what reading "The Best Yes" was like for me.  I began to write notes in the margin, I highlighted, and I wrote in my little composition book.  I felt like I was having eureka moments by the pound as I poured over the pages.  I clutched the book in my hands as I boarded my plane thinking that people just might find me a bit odd, but I didn't care at the same time.  I read throughout much of the flight.

See, I have been that woman so overwhelmed that often I felt frozen by the decision making process.  I stood still rather than moving forward.  I want a better yes.  No I want the best yes.  I want to say yes and follow through.  Have you been there? 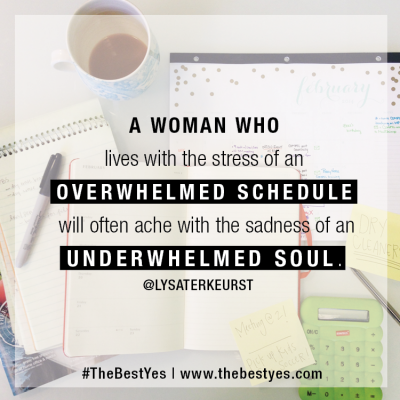 My first yes.  My schedule.

“When a woman lives with the stress of an overwhelmed schedule, she’ll ache with the sadness of an underwhelmed soul.” - Lysa TerKeurst

Oh how I relate to these words!  There is so much in my heart that I want to do, but there is also this voice in my head that has continually told me "You can't."  Besides the general idea that I can't because I have these notions that I am simply unable, there is also this side that says I simply do not have the time.  My schedule is overwhelmed.  But is it really?  I have not laid out my time before me yet, but even as I read Chapter 3 of "The Best Yes" I knew that I had not looked for an opening in my schedule.  I had not made the time. I had been overcome by fear of no rather than overcome by the love of the Lord and sharing that love.

In the margin and above it, I wrote:

What does my schedule say about my soul?
What does it say about what I want to do and about who I follow?
My schedule only reflects my work and my down time.  I want UP time.

Step one is finishing Lysa's book and taking this call as seriously as if I was already living it day by day and for my life to reflect my God in each and every step I make.  I'm ready to be empowered.  Are you?

Are you feeling soul tired?  Have you looked at the patterns in your life and do not like where they have taken you?  Do you struggle with when to say yes and when to say no?  Do you avoid the yes and no altogether and instead stand still?  Are you tired of filling your life with empty activities rather than fulfilling activities?

I believe this book will lead you into a read adventure and purpose.

New York Times Bestselling author Lysa TerKeurst has written a new book about finding your Best Yes. Many call this book “inspiring” and “fabulous.” Myself, I call it a gift.  You can get your copy at http://goo.gl/ZFUZbD

Lysa TerKeurst is the New York Times bestselling author of Made to Crave and Unglued. She isn’t shy about admitting what a mess she can be. But in the midst of everyday “growth opportunities,” she’s been learning God’s lessons and sharing them on her blog (www.LysaTerKeurst.com) and in her books. Lysa is president of Proverbs 31 Ministries and writes from her sticky farm table in North Carolina where she lives with her husband, Art, five kids, three dogs, and mouse that refuses to leave her kitchen.
Posted by Kelly Blackwell @ Heres My Take On It at 9:00 PM 5 comments:

There have been lots of faith-based films that I have wanted to watch recently but haven't had the time.  After catching "God's Not Dead" FINALLY, I decided to get back on board with spending some more time with uplifting films.  With that mind, I could not wait to watch and share "CAMP." 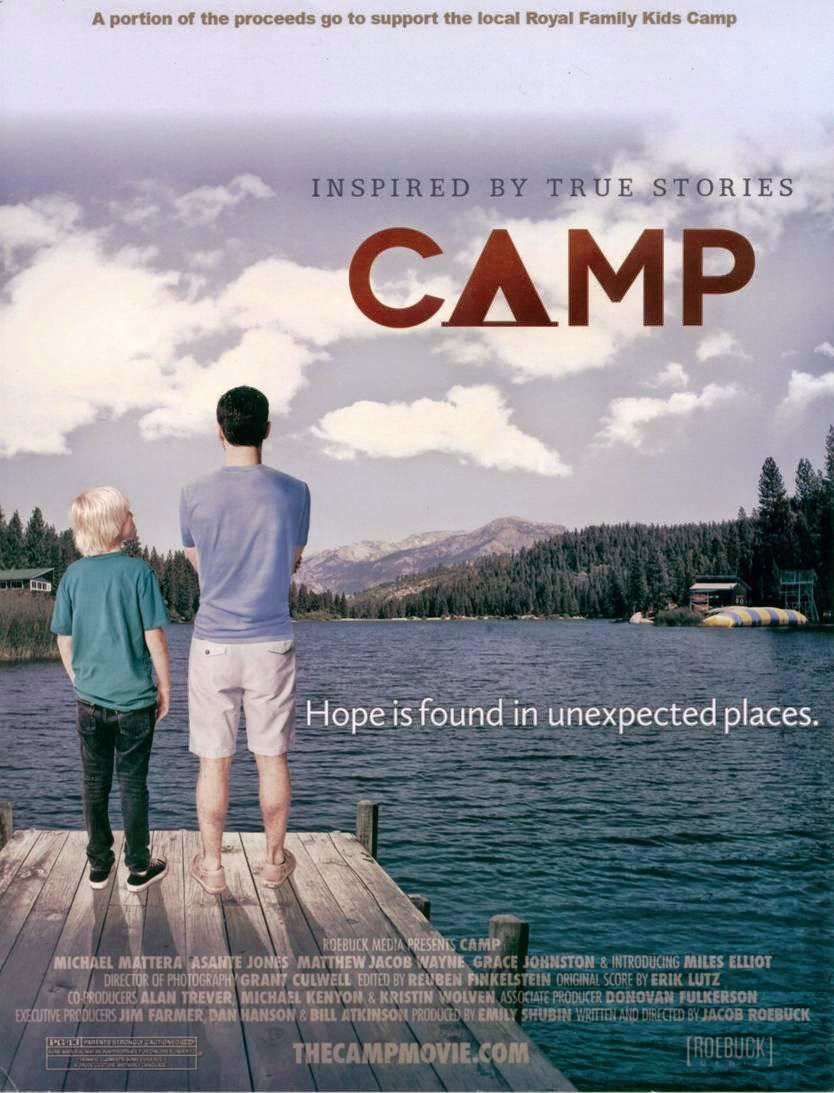 SYNOPSIS(Christian Film Database) -  CAMP is the latest film from Jacob Roebuck. Inspired by true stories, we meet Ken Matthews (Michael Mattera), a hot shot investment banker doing whatever it takes to make a good impression with a wealthy client, including becoming a camp counselor. Ken is partnered with Eli, a kid thrown away by his parents and in foster care, for a week he won’t soon forget.
MY REVIEW:  When I decided to watch CAMP, I thought it would be a simple tale of an adult having their life turned about by a child's need and love.  Was I wrong!  It was so much more.  CAMP is a story of hope and it is a story of a real camp called Royal Family KIDS.  Royal Family KIDS is a week long camp that serves foster children for a week in the summer.  Many of these children are living in group foster homes which means they share most everything yet receive so little.  This is the case when there is simply not enough to go around.  This camp is the opportunity for each child to be cared for and treated as special as they truly are.  Hope and love is abounding at this camp.

Now don't get me wrong.  CAMP is not some long documentary or even a docudrama about the Royal Family KIDS.  It is a story that combines the story of many of these campers over the years Royal Family KIDS.  This film focuses mainly on Eli.  Eli is like so many children who has had so much promise, but with life handing him a rough deal, he needs hope so much more.  Ken is assigned to Eli.  Ken could use some hope himself.  Ken is a self-absorbed investment banker who has his eyes on the prize and that prize is all about getting bigger, better and wealthier clients.  This week at camp is a means to an end.  Sometimes though, God has bigger and better plans.

CAMP is a film that has heartbreaking lows and beautiful highs.  If you are willing to open up, you will find a true jewel here.  Realize the film starts hard and ends soft.

SIDE NOTES:
- Remember that CAMP is PG13.  There is some foul language.  It is not something that goes on and on, but there is some swearing here and one crude gesture.  Nothing that is negative is done for any purpose other than to offer truth with minimal shock value.  This is not a full on feel good family film.  There is some violence that is primarily not seen but referred to.  There are some rough moments, but this is sharing truth that does exist for many children in the system and those who are not...yet.  It is not remotely as bad as reality, but there are some themes you should be aware of first.  I would watch it before sharing it with my family.  I think the age of 13 is where I would begin.
- Don't stop when it is over.  The end credits include interviews with counselors and former campers turned counselors.  From this we find that many of the stories are based on experiences at the camp.  It is beautiful.  This is the time I needed tissue like you wouldn't believe!
- I watched CAMP via Netflix streaming.


Learn more about Royal Family KIDS here.  You might even find a camp near you that you can give your time to.

Check out this clip from CAMP.